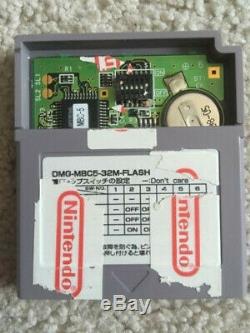 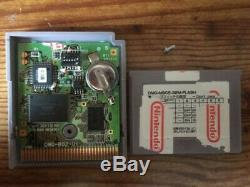 Pokemon Silver German Demo Prototype Dev Developer GBC GameBoy Color Cartridge. Appears to be a pre-release review demo from Germany with certain features removed or changed to hide certain details from being seen. Differences from a retail German cart I had noted were no town names displayed on the map, no access to the gym badge screen, your starter can not evolve, and even though savefiles exist you can not access the "Continue" option on the Continue/New Game screen. There are NPC guards at the Violet City gate and Dark Cave entrance, ultimately ending the demo after returning to Professor Elm after your rival steals a pokemon. However, using cheats with a GameShark, etc, to bypass the guards reveal other oddities not meant to be seen.

There are the same NPC guards at the North and East entrances of the Ruins of Alph as well as at Sprout Tower. The guard at the East entrance of the Ruins is non-functional as you can walk right by him, but talking to him delivers the same line of text as the others, which roughly translates to "Unfortunately, this can not be done". I haven't explored much further into the game, so I'm not quite sure if there is anything else interesting worth discovering. I imagine there could also be hidden data as well. The item "Pokemon Silver German Demo Prototype Dev Developer GBC GameBoy Color Cartridge" is in sale since Tuesday, March 26, 2019.